In February I wrote about not ignoring opportunities on your own doorstep and while the North Lincolnshire coast can't really be classed as the doorstep to Grantham (75 miles / 120km) it is a part of the same county I've lived in for 21 years that I've never photographed before. 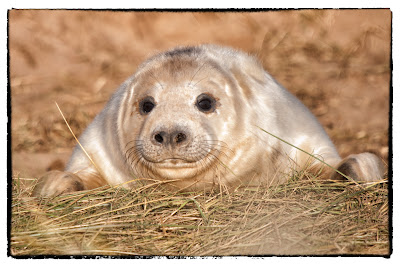 I had the opportunity to visit the Grey Seal colony at Donna Nook (Lincolnshire Wildlife Trust) near Louth and along with John Rourke (http://www.johnrourke.net/) set off from Grantham at 7am.  Following the Sat/Nav north we arrived in the well marked car park next to the beach, which only had 12 cars parked up, but that didn't last long. 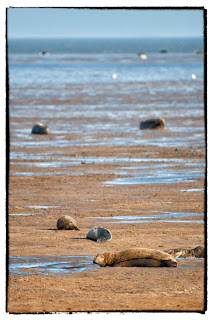 Suited and booted against the elements we set off and were amazed to find that just beyond the car park was a fenced off public viewing area and in front of this were seals of all shapes and sizes as far as the eye could see.  There are over 2000 seals, including over 800 seal pups, on the beach. 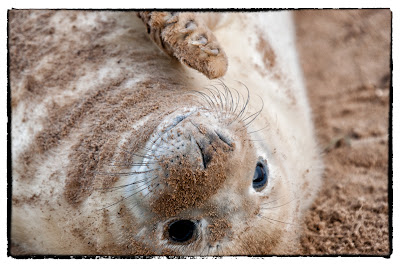 A mother and pup were just beyond the fence, and we'd walked less than 200 metres from the car park.  80-200mm f2.8 lens fitted and images of mother and baby duly taken, along with a bull that decided to defend its territory from another younger male that had strayed into its domain.  The first thing that struck me was the speed the bulls could actually move and I was actually glad we couldn't stray onto the beach area.

A little further along there was a young pup lying close to the fence line and we decided to see if we could get some wide angle shots without getting too close.  I placed the camera, fitted with a 10-20mm f3.5/f4.5 lens (set at 10mm) on the ground between the inner and outer fence and used the live view to set the framing.  I made sure the camera lens didn't go beyond the inner fence and I kept back beyond the outer fence with just my right hand on the camera.  One of things we had to careful of not getting too close to the pups because human smell on the pup might mean the mother rejecting it and the pup would then die.

The seal pup was curious and I was able to shoot five frames, with the best one being cropped slightly to remove the fence that was showing in the final image.  All in all the best picture of the day. 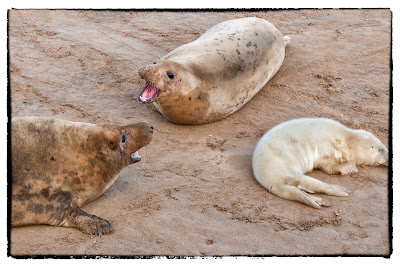 We moved along the fenced area taking shots on the long telephoto lenses of the interaction of the mother and pups, the 'face-offs' between mothers as they defended their pups and fights that broke out between various young bulls and dominant males. 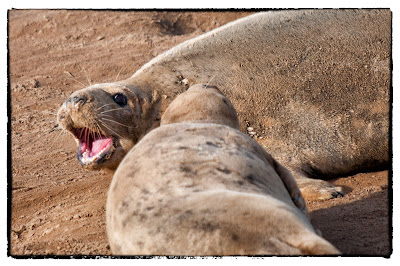 After 2-hours we moved back along the fence line towards the car park and we noticed that a lot move people had arrived and it was becoming quite crowded along the beach.  We decided to head off to another area of the Lincolnshire coastline (more on that next week) but not before visiting the wardens hut in the dunes to make a donation to the Lincolnshire Wildlife Trust, to help in the great work they do here and other parts of Lincolnshire.

This is a wild Grey Seal pup, taken today at the Donna Nook seal colony on the North Lincolnshire coast. 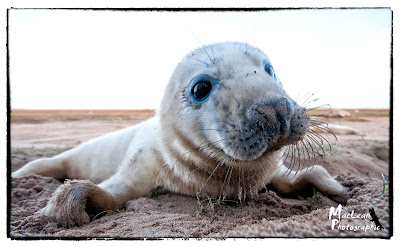 What is it about water that attracts photographers?  Whether it is streams, rivers, lakes or the sea, water features a lot in my images.  Is it a very British thing as we are essentially islanders and are never far from water or is this the same for photographers the world over?

Picture of the Week - Rain Drop

This weeks picture is of a rain drop that was sitting perfectly on the leaves of the Eucalyptus tree outside our back door at home.  The picture was taken with a 60mm f2.8 Micro Nikon lens and ring flash, which brought out the colours and reflections.  The most mundane things can also be some of the most beautiful photographically. 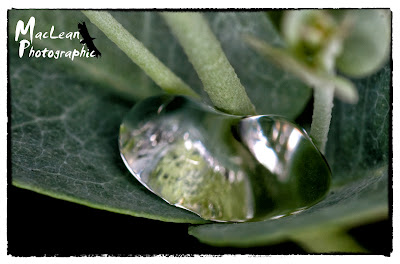 One of my favourite places to take pictures is on the floor.  Honestly, this isn't a joke.

Where do most people take pictures from? Eye level, standing up, is the correct answer. Most of the time this is the best angle but getting low (or high up) can give the picture a much better perspective and more drama to the image.
Here are some examples of getting the low down.

All of these images were taken by laying on the ground. By filling the foreground with the subject the eye is led into the image.  If you don't fancy laying down put the camera on the ground and use the view screen to line the shot up.  This method is a bit more hit and miss but it still works.
ALL IMAGES ARE THE PROPERTY OF MACLEAN PHOTOGRAPHIC AND CANNOT BE USED FOR ANY PURPOSE WITHOUT PRIOR PERMISSION. 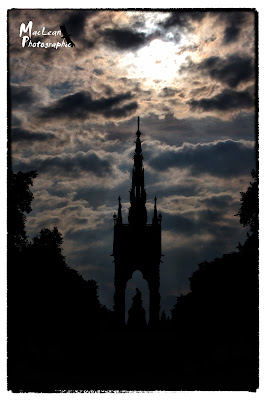 
Here are some examples -